The 12 True 3Å total energy wheels installed at the CRBI building have operated continuously, 24 hours per day, at this research laboratory for approximately 16 years. Minimal maintenance has been completed since the systems are only shutdown during extended holidays or on an emergency basis. The purpose for the site inspection was to assess the current condition of these total energy wheels and to determine whether Johns Hopkins should allocate funds to begin replacing/updating them in the near future.

>> Get the full Johns Hopkins report as a PDF.

John Fischer (SEMCO) and Greg Mason (ATS) met with Craig Goodwin and Jason Morrison of Johns Hopkins on the morning of August 28, 2016. Craig Goodwin mentioned that given the age of the SEMCO wheels, he had begun to allocate maintenance funds to upgrade or replace these wheels, as needed, and the inspection was requested to provide guidance on when any maintenance work might be required. Based on energy savings trended by the Health and Safety monitor installed at the CRB I facility in 2007, energy savings provided by the wheels at this facility have exceeded $9,000,000 (or approximately $600,000 per year).

Jason Morrison coordinated a methodical turn down of the airflows processed by each unit inspected, while three remaining units satisfied the needs of the facility. The energy wheels were slowed to minimum speed allowing for the inspection. The inspection checked for the following:

No inspection of the exhaust air (top section) of the units was made (or necessary) because there is no easy access to these sections and since the wheel could be rotated allowing all wheel media to be viewed from the supply air compartment.

All of the wheel media sections were found to be tight with no gaps between sections, at the spokes or at the rims. All spoke systems looked good with no apparent loose bolts or obvious wear of any kind. In short, the fit and structural integrity of the media looked as it did when it was originally installed 16 years previously (see photo on right). 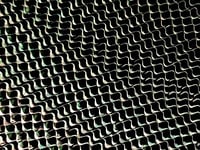 The wheel media was found to be very open with no plugging of any kind. It was quite easy to see through the transfer media. The pressure readings across the wheel taken at the Health and Safety monitor confirmed that the wheel pressure loss values were in agreement with the published data for the airflows reported for the system (see photo on left).

Two wheels (1-3 and 2-1) had media scarred near the outer rim. This appears to have occurred when the purge angles on these two units were found to have closed off at some point due to missing screws and rubbed the rotating transfer media. The media is still open and solid, so this is primarily a cosmetic issue at this point.

Wheel performance:
Wheel performance has been monitored at the CRB I site locally and remotely through the Health and Safety monitor installed in 2007. In addition to ensuring proper purge operation in VAV applications, this monitor also provides real time performance data as well as accumulated energy savings, tons of carbon reduction, cooling tower water savings, and other important data. 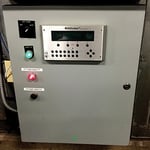 To assess the operational efficiency, especially latent performance which provides confirmation that the desiccant surface is still in place and active, performance was observed for system 4. Around 11:00 AM the outdoor air was 83.1 degrees and 56% relative humidity. The return space conditions were 73.3 degrees at 50% relative humidity and the supply air from the three wheels was 74.8 degrees and 52.8% relative humidity. The supply airflow was 60,000 cfm and the exhaust flow as 78,000 cfm. These values confirm a sensible and latent effectiveness of 86% which was found to be in excellent agreement with the published data for a new SEMCO True 3Å (TE) wheel.

Wheel seals, casing, drive and sensors:
The wheel seals, casing drive and sensors appeared to be in good condition. The normal discoloration associated with 16 years of use was apparent on the paint and other components, but aside from that and some excess bearing grease splatters, all looked very good.
One wheel drive belt was off (system 4) but it was not due to a belt break. The connector pin that links the two ends of the belt had fallen out and needs to be replaced. Jason Morrison put in a work order for this fix. All other original motors, inverters, and belts were found to be in good condition and working properly.

All wheels were found to be in very good operating condition, especially after 16 years of continuous operation under laboratory exhaust conditions. Cosmetic damage was found on two wheels apparently due to missing screws in two of the purge sections. The wheel media looks very good for the age of the units and all sections were found to be tight and solid. Performance measured for system 4 was in line with what would be expected for a new wheel.

Scheduling annual inspections for all wheels at Johns Hopkins is recommended in order to address any needed maintenance. Between Johns Hopkins buildings Ross, Traylor, CRB I, CRB II, and Broadway, there are 40+ wheels, most that have operated continuously for between approximately 13 and 16 years. If Johns Hopkins were to allocate funds to begin replacing wheel media in the future as needed, the average life of wheels would be approximately 25 years. In this way, any retrofits could be easily accomplished with minimal down time and with plenty of advanced planning. The logical place to start would be the two wheels with scarred media at CRB I.

In conclusion, it was satisfying to see the SEMCO wheels operating as expected and in such good condition after so many years of operation. We at SEMCO greatly appreciate the loyalty Johns Hopkins School of Medicine has shown us over the years and the many projects we have completed together. It is truly exciting to see the significant impact that our technology has made at Johns Hopkins School of Medicine.